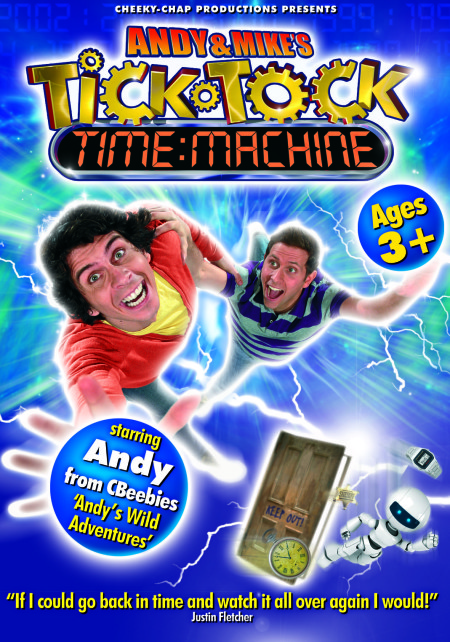 I was surprised at how much me and hubs enjoyed the show, there’s lots of banter and laughs for adults too, hubs and I were in fits of laughter from start to finish.

The show is full of stuff that the kids will remember such as Mike’s Babybel dance, very energetic dance routines and my favourite, Mike’s horse acting!  I was also really pleased to learn a way of winning rock, paper, scissors every time, but I’m not telling you how.  You’ll have to go see the show to find out the secret!

The show begins with Andy & Mike doing an Egyptian dance & dragging a mummy (who they dress up as a mummy) from the audience. There’s also a dad who is named ‘Dave’ for the purposes of the show, and ‘encouraged’ to take part.  The dad they dragged onto the stage during our show was dressed up in a lovely golden wig and a tutu which the kids thought was hilarious!

Andy & Mike discover Andy’s Grandad’s time machine and travel to the past and the future to do all sorts of cool stuff.  Ultimately it’s to help old Andy from the future, but I’m not going to ruin it by giving too much away.

Although the show was longer than I expected (although there is a 20 minute interval so don’t worry about toilet breaks), the kids were transfixed the entire time. They laughed, danced around, shouted a lot and absolutely loved it! The age given, 3+, is definitely right.  I suspect younger children would enjoy the show but Lil Man and Lil Miss (aged 5 and 4) really got the jokes, they joined in with the singing, dancing and generally had an amazing time.

I definitely wouldn’t hesitate to take them again!

Unfortunately, we didn’t get to meet Andy and Mike.  They did stick around after the show to meet the audience and although the queue to meet them wasn’t very long, the kids were starving & once they had their light up swords which they had begged for throughout the entire show they just wanted to go get something to eat and go home and play.  Sorry guys!  As consolation (not really) hubs and I have been treated to many a light show as evening entertainment since!

If you want something great to do for a day out with your children, or you’re thinking of taking your kids to see a live theatre show (and don’t worry if you have older children because I’m sure they’d enjoy it just as much) then you must get tickets for Andy and Mike’s Tick Tock Time Machine, or any other show they do for that matter!

If you want to see if they’re going to be performing in your area then you can check Andy & Mike’s website.  You can also follow them on Twitter or go like their page on Facebook too.  You can even join their campaign to Get Mike James on Cbeebies, which I definitely agree with.  Mike would be a fab addition to the Cbeebies team and I know the kids would agree.

And just when I thought I couldn’t love them anymore, Andy and Mike announced that they were supporting the Lullaby Trust on behalf of a beautiful baby angel girl called Matilda Mae and her mum Jennie.  If you’d like to read more about Matilda Mae please visit Jennie’s blog, Edspire, where she writes so beautifully about her baby girl lost to SIDs.  Jennie has raised an enormous amount for the Lullaby Trust and has vowed to raised awareness of SIDs to help other parents who also suffer this tragic loss.  Please help by making a donation, Andy and Mike have dedicated their Autumn tour to Matilda Mae and are supporting the Lullaby Trust by taking donations at each of their shows.  You can also text ‘TOCK13’ to 70070 to donate £3.00 or visit their Matilda Mae Just Giving page to donate other amounts

Disclaimer: We received tickets to see Andy & Mike’s show in order to provide a review. However, my roaring laughter was very real, as is my opinion and willingness to see any future Andy & Mike shows!