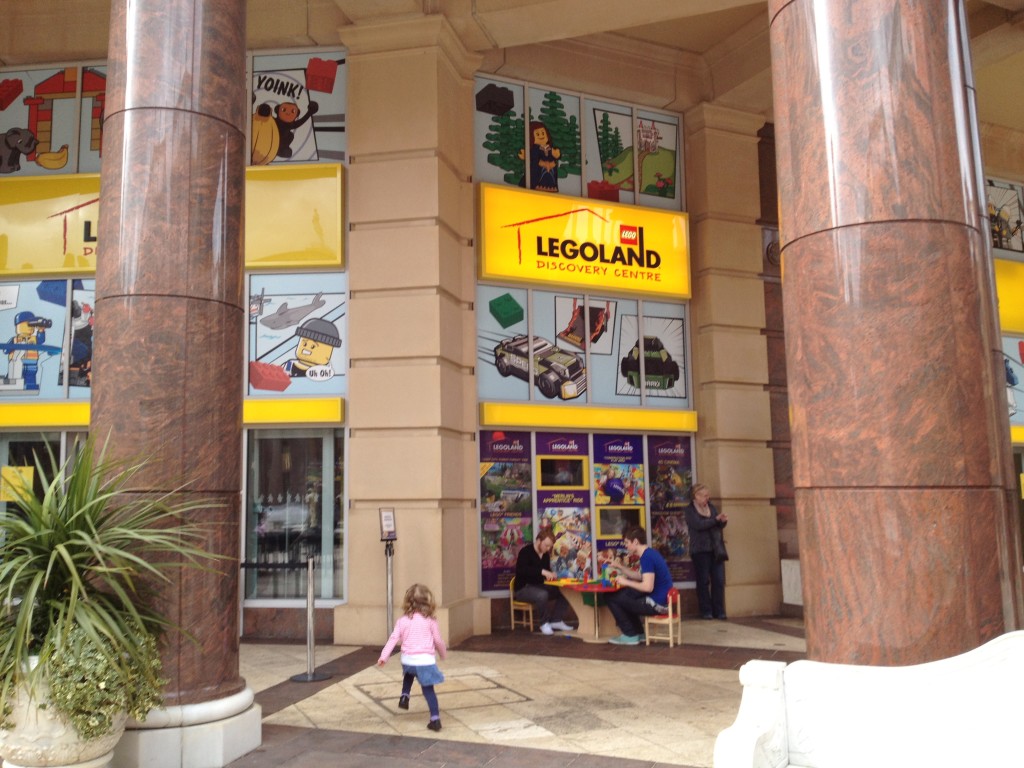 On Sunday we went to play at the Legoland Discovery Centre Manchester in Barton Square at the Trafford Centre for a Blogsupnorth meetup.

Lil Man has been begging to go to the Legoland Discovery Centre for ages so even though I was slightly nervous about taking a very spirited 3 year old and boisterous 4 year old on my own, we couldn’t not go.

He was fit to burst when I told him we were going and once Lil Miss has got over her strop about not being allowed to go to Hello Kitty Land instead, she was pretty excited about the prospect of a day out somewhere fun!

I was very impressed at how organised they were when we arrived, which incidentally was on time after a very blowy drive on the motorway. That makes quite a change. Us being on time I mean, not the blowy motorway!!

The kids looked in awe as we entered the lego factory and it was explained to them how lego was made. I was expecting a little more from the lego factory tour to be honest, it seemed quite a big build up for something that barely lasted a couple of minutes and would’ve been more fun for the parents if the professor had been a bit more of an eccentric actor, well maybe more fun for me anyway!

However, all the children seemed to enjoy jumping up and down to give the machines power and mine were chuffed to bits to get the machines working and then their own little piece of lego to take home.

Afterwards we headed straight for the Kingdom Quest ride where I was pleased to see that the three of us could go on together. The kids were beside themselves when they realised there were guns to shoot baddies with! Lil Miss wasn’t too keen on the trolls and announced at the end she wouldn’t be going on again. She soon changed her mind when she realised she couldn’t go on the other rides. One because she wasn’t old enough, and the other because it would’ve required another adult with us, which was a bit disappointing. They weren’t too happy about it either! However, she really enjoyed herself the second time around on Kingdom Quest and would have happily gone back to shoot the skeletons, spiders and trolls again straight after! 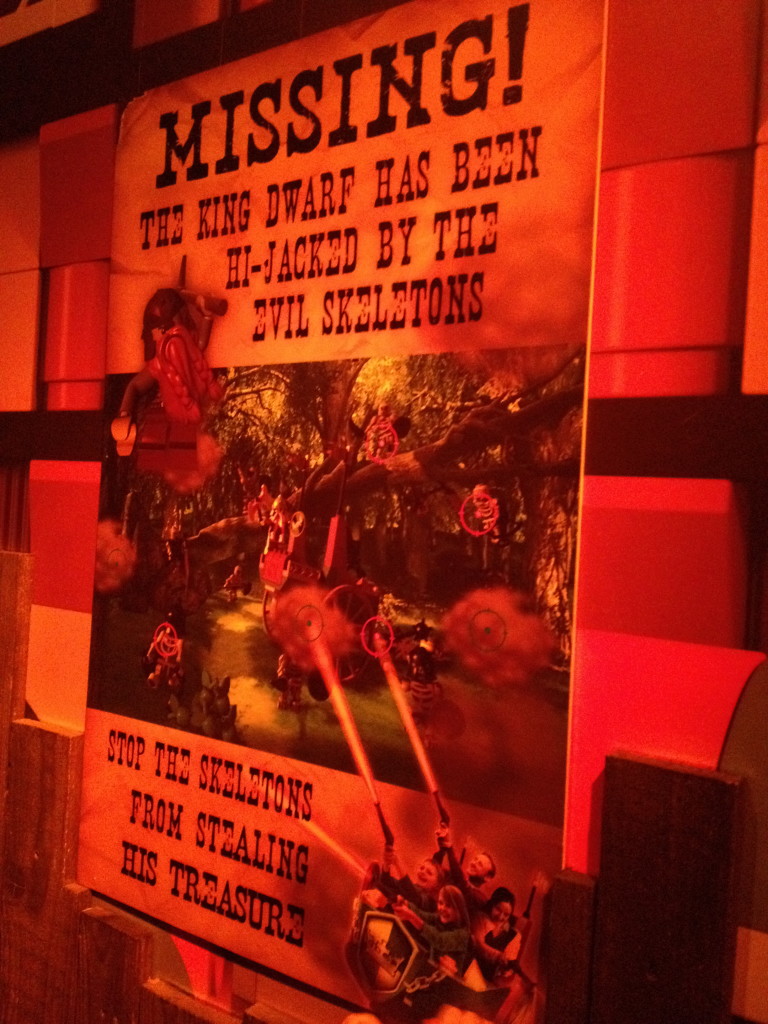 The kids absolutely loved the soft play area. I actually think they’d have been happy spending most of the day in there. I was a bit disappointed we missed the earthquake tables. And there was no time to look at miniland either, they weren’t interested one bit and unfortunately both wanted to do different stuff at the same time, which was quite a challenge. Fortunately there was a rather big group of bloggers with us and eventually we found Becky from Lakes Single Mum and her two fab children, particularly Miss E who kept my two thoroughly entertained! 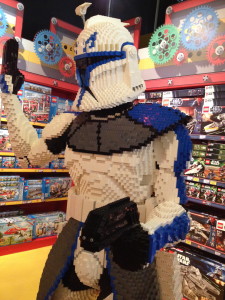 They did love looking at all the large lego displays such as the stormtrooper and the car in the shop (which I couldn’t get Lil Miss out of!) And having seen Harry Potter and Hagrid characters at a children’s festival just the previous weekend they were very excited when they spotted lego versions!

The one bit we all really enjoyed was the 4D film. I almost didn’t take them in as I wasn’t sure they’d sit through it. They also weren’t overly keen as there was too many other attractions catching their eyes, but I’m glad we did. They sat through the whole film in their glasses trying to grab at everything they saw. The snow & rain effects were great. I didn’t realise at the time but there were also wind effects. I actually thought it was just the air con!! Duh!

We really had a great day out, although by the end of it I was more worn out than the kids. Unfortunately, I had to drive home so couldn’t take advantage of a nap in the car like they did!

We’ll be returning at some point, they really enjoyed it and there was lots they didn’t get chance to do. Lil Man has already asked when he can go back and both have enjoyed telling everyone who’s asked them about playing with the lego, and rather enthusiastically, about shooting all the baddies!!

Next time I’ll make sure I don’t go solo and we’ll also be going when it’s a bit quieter. To be fair it was the last weekend of the Easter School holidays but it was pretty hot and manic in there & there are areas where there wasn’t a huge amount of space. The kids being much smaller and far more nimble than me, could zip through little gaps which made it hard for me to get past people to keep up with them. There was a few times I lost sight of them which I didn’t like. I would have liked to see a security door or gate on the exit that can only be opened by adults. Mine are more than capable of opening the heavy fire doors and the exit to the shop had no door at all. Lil Man was so desperate to get out to the shop that I did worry that rush off without me!

We were also invited to Cawaladers afterwards, which is quite handily, right next door. The kids were given an ice cream each and I had a coffee. I couldn’t wait to go in there. We spent many an afternoon in Cadwalders in Porthmadog during our childhood holidays so it was a bit of a blast from the past. The ice cream was just as good as I remember and the coffee was a very welcome (desperately needed) caffeine boost after 3 hours of chasing round the LDC!!! 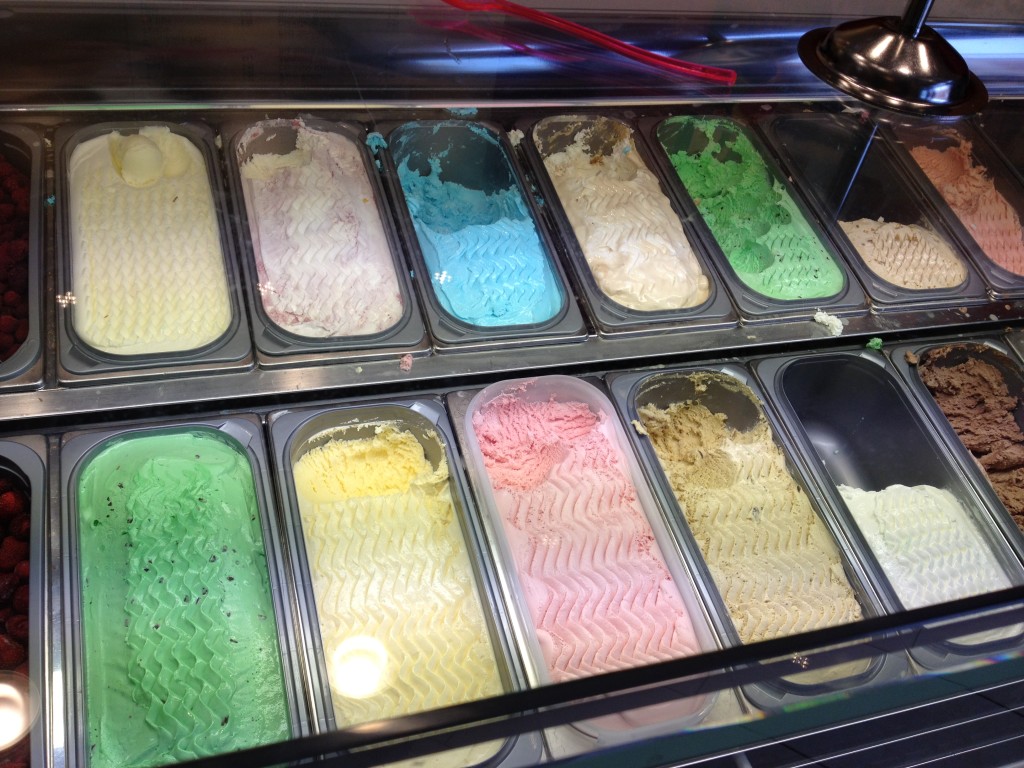 We received free tickets to the Legoland Discovery Centre to attend the Blogs Up North meetup and also free ice creams and coffee at Cadwaladers.