For WEEKS the kids have been literally bursting with excitement because we’d been invited to the Little Fun Fest at Redhouse Farm in Altrincham.

They were really looking forward to it though, more so with only a few days to go. 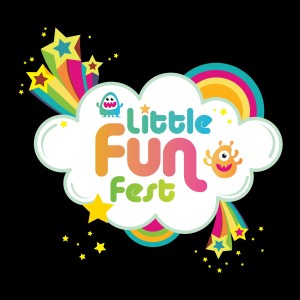 All week they’ve been counting down the days and on Friday morning Lil Man got up and shouted ‘one more sleep til SATURDAY!’ They were looking forward to seeing Alex Winters (from cBeebies) and Mr Bloom and most of all the inflatable slide!!

We were all set to go early & get breakfast somewhere else until breakfast at Red House Farm was highly recommended, so we headed straight for the tearooms with our rumbling bellies the second we got there.

I only had the mini breakfast that we also ordered for the kids. Stuffed is not the word. The giant sausage was a mini meal in itself. My only disappointment was that I was too full to finish off what the kids couldn’t eat!

With very full tummies we headed out to have a look around. Lil Man was a bit overwhelmed with everything there was to do and struggled to choose at first, from fairground rides to the inflatable slide and bouncy castle to the petting farm, the barrel train ride and of course all the entertainment in the barn and the big top. All of which were included in the ticket price! 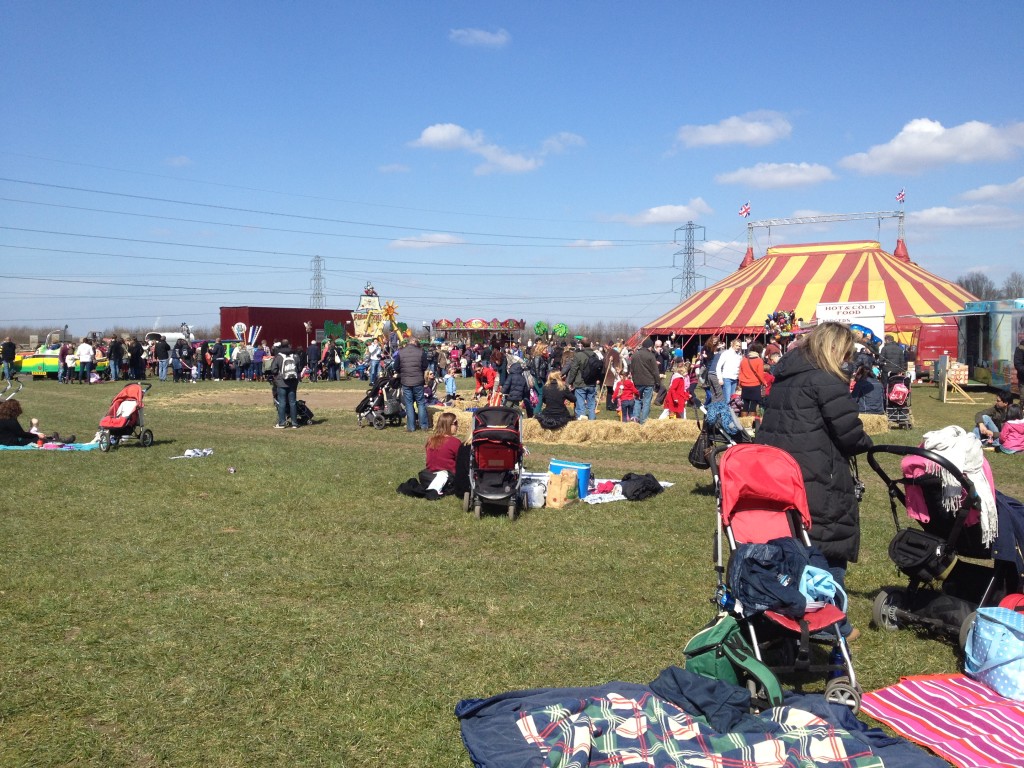 We needn’t have been worried about the weather one little bit as the sun shone all day, specially ordered by Jem for the Little Fun Fest of course! But even if it hadn’t there was plenty to do inside where we could have kept dry. Parking was really close to the event too, which was excellent as it meant we were able to leave the picnic in the car, plus changes of clothes for the kids and didn’t have to lug loads of stuff about all day.

We didn’t see much of Hagrid after Lil Miss ran away from him because he was too big, but Harry Potter was hilarious. I nearly fell off my chair laughing when he pointed at her umbrella and told my mum the end had fallen off her broomstick!!!

Waiting a while for the kids to have their faces painted meant we missed some of the entertainment, but it was well worth it. We did get to see some of the Puppet show in the barn while we were waiting and although That Face Painter was the only one there, she did a sterling job. She was pretty rapid & it seemed that every child got exactly what they wanted. Lil Man bless him, helpfully stood there holding Lil Misses hair out of her face while she had it painted. The kids were chuffed to bits and Lil Man even asked to go to sleep in his face paint!

I loved the fact that the Little Fun Fest was so close to home, it meant that loads of people we knew were there too. We got to spend the day, well most of it, with my mum, sister, brother-in-law and niece and some of my closest friends and their little ones. We also got to see Mommatwo and her brood, Fi from Childcare Is Fun and her tribe too, and we got to meet some other Twitter friends too like Claire and Rural Mummy!

Starkidz provided some of the entertainment including characters such as Spiderman, Spongebob & the Easter Bunny. Lil Man was made up to have his picture taken with Spiderman, he even smiled nicely without pulling a face, which is a miracle in itself!! (There’s another story in there, which I’ll tell you another time) And having recently had Hello Kitty visit our house where Lil Man hid under the dining table for the entire duration of her visit, I was amazed when he volunteered to hold Lil Misses hand so she’d have her picture taken with her!

Meeting Spiderman totally made his day and given that he’s usually very quick to accuse characters of being ‘people dressed up’ I was surprised when he whispered to me that it ‘really was the real Spiderman’!

The mini mosh pit in the big top was fab, we were able to let the kids just go and dance and we got to sit on the sidelines (hay bales) and watch. It meant that they were all safe and contained, and Lil Miss didn’t need to attempt scaling barriers to get to Alex like last time!!

One of the highlights of the day was the dance off between Alex and Fi.

Fi challenged Alex to a dance off as a joke on Twitter and didn’t realise that it was going to form part of her day, least not in the big top anyway, until she arrived at the Little Fun Fest to find it on the schedule! 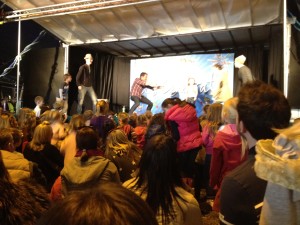 I have to admit I was a bit cowardly and hid behind Lil Miss and my niece when he asked for another mum volunteer. He’d already thrown buns at me, made me dance to get a lollipop for Lil Miss and picked me out of the crowd when I started cheering for Fi! That man busts some serious moves (more so the man in the hat!!), no way was I taking him on! I did get a little video…but the best one was filmed by Claire and now she’s kindly popped it on Youtube, you can have a peek below 🙂

We also got some special treatment and were allowed to go meet Mr Bloom and spend some time with Alex in the VIP area, which me and the hubs thought was great. The kids were fairly indifferent, having met them both before. They were more interested in the juice and the lollipops! However, Mommatwo’s Jellybean kept us entertained by rolling around on the floor leaving a sand trail & generally being very sweet to all the other little ones. Alex also helpfully fed the kids a ruck of sugar ensuring we were able to keep them awake the entire way home!

I can’t tell you what an amazing day we had. It was an absolute blast! The Little Fun Fest did exactly what it said on the tin, there was so much to do we couldn’t get round it all, they didn’t even go on all of the free fairground rides, we could’ve quite easily gone both days and been completely entertained the entire time.

I can’t wait for the next one!

The organisers did an amazing job. It was so well planned and there were loads of little things that put the icing on the cake, such as the Easter Bunny saying goodbye to all the little ones and giving them a chocolate egg as they left.

If you missed this one, GO SUBSCRIBE NOW to the Little Fun Fest website and make sure you’re the first to know about any other Little Fun Fest events. If you’re there listen out for me. I’ll be there. WITH BELLS ON!!!