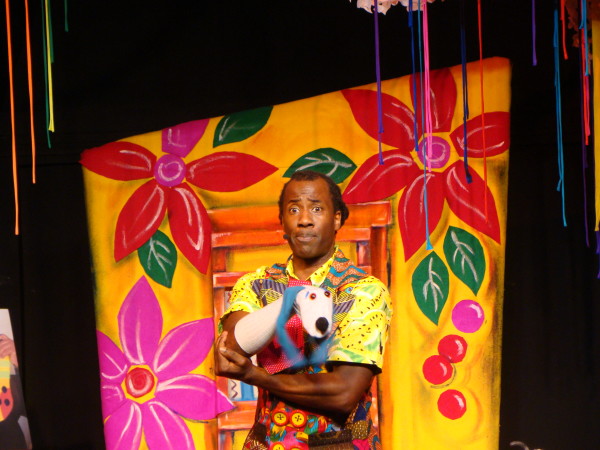 The show starts with Sid singing along to one of his well known number raps. Something that young children would recognise really well & guaranteed to get them bouncing in their seats.  It certainly worked for Lil Man and Lil Miss.  They were bobbing up and down within seconds! 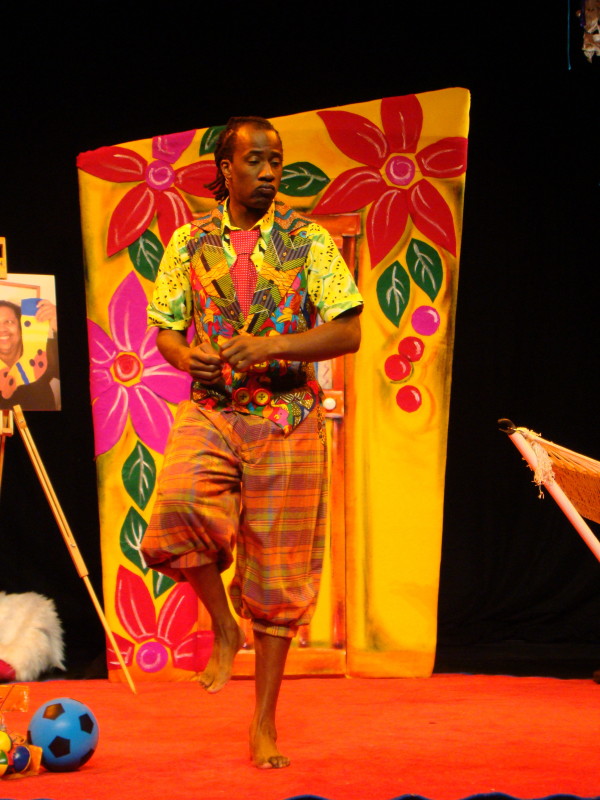 Then Sid starts telling them all about how he’s going out to meet his Cbeebies friends and within minutes he had all the little ones shouting that he’d forgotten his socks and shoes.  Lil Man and Lil Miss are normally quite shy when it comes to joining in with stuff like this but they were shouting as loud as they possibly could and loving every second of it!  They enjoyed meeting his dog Fluffy and Lil Miss spent the time telling us whether Fluffy was happy or sad!

Sid then goes on a massive adventure in search of his missing socks, using just his imagination and a few props.  The kids had a blast, they bounced up and down to the music, sang along, joined in at every possible moment and spent the interval searching for wool to enable Sid to knit his own socks.

The theatre staff at this point were fab.  Lil Man looked high and low and couldn’t find any wool.  He was not for giving up and sitting down until he’d found some and realising this they went off to fetch some for him to find.

Thank goodness, I reckon he’d have still been searching at the end otherwise!!

The show involved virtual rockets, racing cars, trains, a trip to the Caribbean (the kids had a phase afterwards answering ‘Rice and Peas’ to any question I asked them!) and a trip to the planet where Aliens teach you to knit!  I won’t tell you any more as I don’t want to spoil it, because of course, you’ll be going to see Sid’s Show, yes?

Sid managed effortlessly to capture their full attention (and mine!)  for the whole duration of the show, which was around an hour in total plus a 20 minute break in the middle for ice cream.  It was the first time I’d taken them both to a show of any kind, I had no idea how they’d be and whether we’d be able to keep them on their seats for more than a minute but they were transfixed.

They loved every minute.  We had a great day out together.  For children’s entertainment, I’d definitely recommend it!

We even got to meet Sid at the end of the show.  We went outside for a bit of fresh air and waited until right at the end where Sid played a joke on them and pretended he hadn’t seen them waiting.  Their faces were a picture when they thought they wouldn’t get to meet him, but then the little divas got him back by refusing to have a picture taken with him.  Joking aside,  he was brilliant with them and I couldn’t believe the amount of energy he still had after all that racing, choo chooing and zooming around the stage.

Obviously, I had to mention this and ask him where he got his energy from….. meditating for 3 hours a day to the teachings of Bob Marley of course!

Clearly, it’s where I’m going wrong.  I’m heading to Amazon in a minute to download some of these teachings!!

Sid’s show has tour dates around the UK until April next year so there’s still plenty of time to go and see Sid.  You can find the ticket info (tickets are around £12.00 each, depending on the venue, but you can get a family ticket for around £40.00) on Sid’s website.  You can also follow Sid on Twitter and Facebook to keep up to date with what he’s doing, plus he’s pretty great to chat to!

At the end of the show Sid did mention that he was going to be running some projects next year with the aim of empowering children, something I’m definitely interested in, so keep your eyes peeled for that.

Disclosure: We received tickets to see Sid’s Show for the purposes of this review. All opinions are most definitely my own, sometimes they belong to my children, but mostly it’s me!