A while ago one of the fab guys I follow on twitter @benwakeling, wrote for the Huffington Post about social media fatigue.  You should go read it (and his blog), he’s very funny.

When I read it, I gave myself a kick up the bum.  I knew I was spending too much time on Facebook and Twitter when I should have been being  far more productive. I justified it by telling myself it was wind down time, and talk to actual grown up’s time.

But enough was enough, it was time to get some work done, so I tried ignoring Facebook. I tried my best to limit my time on Twitter and I decided I was not ever signing up for any other social media platforms.  I didn’t have the time.  I’m an excellent procrastinator as it is and I never need more distractions.

However, in snuck Instagram. I only downloaded it to begin with so I could put pretty filters on my photos, I had no clue about followers, comments, and stuff. Eventually I cottoned on and began to slowly add people.  Well it would’ve been rude not to!

Then my friend Matt (who is most excellent at SEO) convinced me to join Pinterest for some work I was doing for him. I reluctantly agreed.  It was work after all, but I was just using it for work purposes, not actually using it!

Fast forward a bit and I now have pin boards for everything.

I started making lists & shopping in October! This is completely alien to me. I’m normally the mad woman tearing around at 4.55pm on Christmas Eve buying 20 last minute presents! So, there are some advantages to this I suppose.

Then there was G+, which again was totally Matt’s fault.  He convinced me was essential for the Centre. Am I using it for that? Not yet. Oops!  But I have posted some blogs on there & I will get around to using it for the business when I’m a bit more used to it.

I will, I’m sure. Yes, definitely.

And all that is without the blogging. Not just writing them, but reading others too. How can you expect people to he interested in you if you aren’t in them?

I have to use Facebook as it’s great for the business, and Twitter would be, I’m sure.  If only I could make myself use the business account a bit more.  But that’s like choosing between; going to a party where all your favourite people are, to one where you hardly know anyone at all!

There is now a huge amount of stuff to distract me from doing useful things, and although I follow a similar group of people on all platforms I do find different stuff in each place. Even if I don’t I have to check, just to be sure. 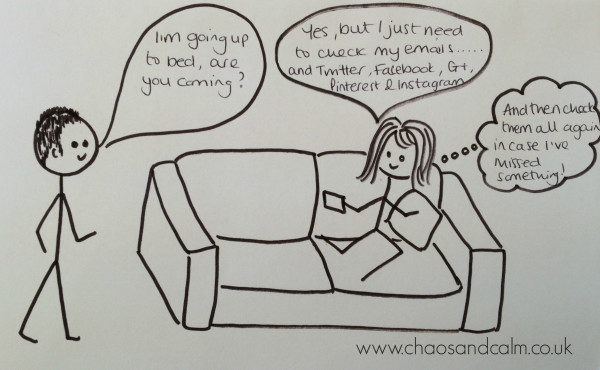 I’ve never been very good at missing out.  I have a mahoosive case of FOMO, but that’s a post for another time!

I have social media overload, I’m not quite fatigued yet, but I’ll probably get there soon if I don’t do something!! I’m debating turning some off some of this social stuff. As I said, I’m excellent at procrastinating already, I don’t need more help!

But which? I like them all. I hate that I didn’t just stay away in the first place.   What makes it worse is that there are apps for them all on my phone now, I don’t even have to get the laptop out.

My head hurts just thinking about it!   And nobody mention Snapchat!!!

So, which would be first to be ditched on your list?