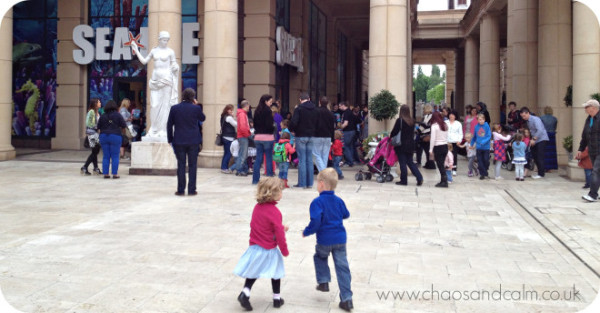 Ever since we visited the Legoland Discovery Centre, the kids have been begging to visit the Sealife Centre, which has recently opened in Barton Square at the Trafford Centre, Manchester.

We were very lucky to be invited along with Blogs Up North and lots of other lovely bloggers to have a sneaky peek of Sealife Centre Manchester before it even opened. The kids were extremely excited. They couldn’t wait to get in there. And to be honest, neither could I! Hubby (being a proper grown up) was slightly more reserved.

The tour began with an interactive turtle show which told us all about turtle babies. The children were encouraged to cheer them on to get into the sea, which they really enjoyed and were happy to join in!

The next room we went into was like a fish vortex. It’s actually called the shoal room. It was pretty cool watching them swim round and round, quite mesmerising in fact!

There were little tunnels in between all the tanks and areas where the kids could pop up in little bubbles as if they were inside the tank which quite amused them. I also had a go, and almost got stuck. That’s one thing I wouldn’t recommend!

We didn’t get to spend as much time in the tunnel and the Shark Shipwreck as I would have liked, it got a little cramped as one group were trying to leave as we were in there so we thought it best to get out & come back later, unfortunately we didn’t get chance. I’d have happily stood watching the sharks swim overhead for much longer.

Lil Man spent a lot of his time here searching for pirates. He was convinced that there’d be some as they live on the sea and even more so when he spotted the skull in the shipwreck! 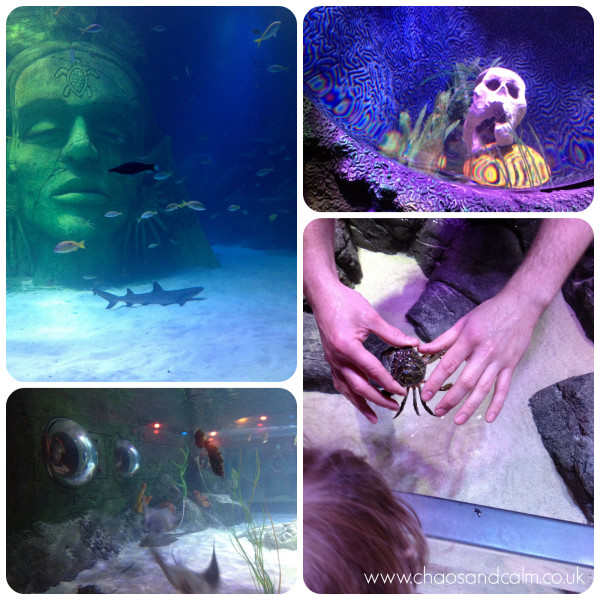 The Manchester Sealife Centre is one of the first places in Europe where you can experience a Sea Trek! It looks like amazing fun (I’d love to experience it. If I weren’t such a wimp that is, I don’t do fish kisses!) You get to go in the tank where their resident turtle Ernie lives. We didn’t get to see much of Ernie as he was napping under a rock (not that I blame him!)

Before we went to the Sealife Centre we spent some time looking through all the Facebook page learning about all the different creatures we might see. There were quite a few that we missed, but as the Sealife Centre wasn’t quite ready to open at the time (we were just invited for a sneaky peek) we didn’t get time to see all the displays. We were most disappointed that we missed the turtles, the octopus, the seahorse nursery and the hammerhead sharks.

One of our favourite places was Stingray Bay. We did spend quite a lot of time there. You can see all around the tank and if you stand there for long enough the fish all crowd around. If stand with your hand on the glass, the stingrays swim past & touch the glass as they swim past. Kinda like fishy high fives! The kids were fascinated with this tank, Lil Man loved the peepholes & would’ve sat there watching for hours if we’d let him!! 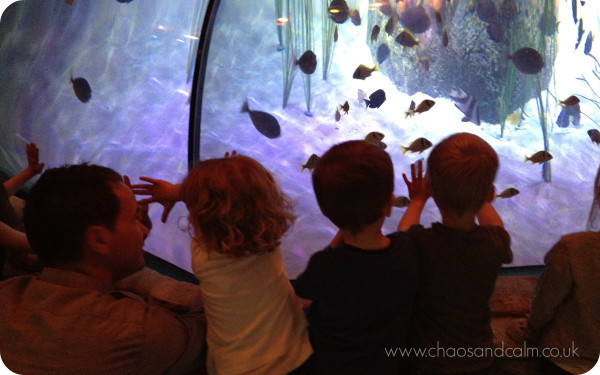 One of the areas they would’ve liked to spend more time were the rock pools. These had crabs in at the time of our visit but I understand there will be more in there now. The kids had to have a second trip back to the rock pool before they were brave enough to have a stroke of a crab, but they did it. Lil Man was particularly proud of himself for picking up an empty shell!

The kids were particularly upset about not going on the soft play area, because it looked ace! Unfortunately, it wasn’t quite ready at the time of our visit, but will be open now. I think the kids would happily go back again just to try that out.

Big thanks to everyone at the Sealife Centre for having us and to Blogs Up North for organising our trip!

We received free entry to the Sealife Centre in order to provide a review.

Well, I’m here! I gave myself that humungous kick up the ass that was required, finally stopped procrastinating and sorted out my blog. By that I mean, I decided on a name, theme, etc and then I nagged my husband until he sorted it!

The one thing that has stopped me blogging for so long was choosing the name. I puzzled over it for weeks. (Ok, months). It was actually harder than naming my children! The reason behind the name is a whole other story though.

I also started to wonder whether it was the right thing to do. Should I be whacking something else on my ever growing to do list? I struggle to keep up as it is! And there are so many bloggers I admire, how could I ever compare? And that I suppose, is the trick. I’m not going to, I’ll try anyway.

I’ve been writing this first post for so long now. Unfortunately, this means the equivalent to scrawling it down on the back of an envelope in that rapidly failing memory of mine. I can’t actually remember any of what I really wanted to write and I remember it sounding so much better in my head. I was intending on my very first post being pee your pants funny, but it’s not quite come out that way. Can’t have it all though, can we?

Anyway, I felt I needed to make my little mark in the Blogosphere. I’ve been squatting. Ahem, guest posting, on other peoples blogs for way too long now.

I don’t quite know exactly what form this blog is going to take yet. It will be to some extent a diary, a recording of my children’s milestones (although I’m a bit late with that one, but there’s still plenty more to come) a place to gather my thoughts, ramble in general and share my experiences. I was just about to type ‘pearls of wisdom’ but I can already hear the guffaws and that’s not what I meant about making you pee your pants laughing!

I’m not intending on this being solely a mummy blog, but my children have been here 24/7 of my life for the last three years and a half years, so I can’t ignore them.  I’ve tried. (That was a joke for those of you who don’t know me!) So, of course, elements of my parenting skills (or lack of them) will creep in every now and again.